The Messias Machine was invented by Al-Masih Daruish Al-Khooss. Mr Al-Khooss was born in Syria in 1926 and thoughout his life, worked as a farmer, a tile layer and a shoemaker. Very little is known about the early development of the device.

In 1979, Ahmad Khammas wrote an article for a German magazine, describing the simple device as a water bucket with a hole in the bottom. When the bucket was spun on a flywheel, like a potters wheel, water would enter through the hole in the bottom and be lifted up the sides.

In 1980, Walter Baumgartner wrote an article for his ENERGY UNLIMITED magazine where he translated much of the article by Ahmad Khammas into English.

Mr. Al-Khooss believed that the development of the Messias Machine was a “peace project for God”. A power plant based on this idea would use a rotating vertical cone to raise water against gravity, using centrifugal force, and then let the water fall again through a turbine to produce electricity and more energy than it takes to keep the cone spinning. 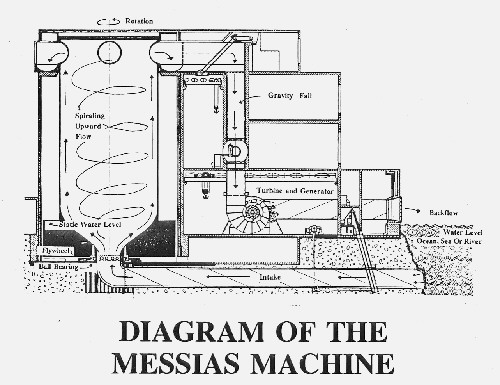 For more information on the Messias Machine, please visit these links: